UTEP / Chemistry / CHEM 2321 / 1,3-dibromopentane has how many stereoisomers in its family?

Description: This covers everything that will be on exam 4 only! Not the final. I went into depth with some of the topics as I even had to learn D and L, which was confusing, but I think I found a way to explain it very well.

For this I am going to examples from the homework and Practice Exam 2014:

This lets us know we have an ether.

So we know we have a O-C-O now its best to work out. We know we have 6H in a triple bond, these  number can be broke up so its best to do a methyl to a methylene x2.  We also discuss several other topics like What is hammurabi’s code?

So as you can see there is two 3H to 2H which equal the 6H triple bond.

Now let’s do another example:

We know there is is an alcohol, but look closely there is NOTHING about 1.53 meaning there is no  hydrogens on the carbon that the oxygen is attached to.

We see that were is 3H, s. So lets put it on the carbon that will have NO hydrogen, that will make it show  up in a singlet. Now as above with the 6H, t we can break that up to get: 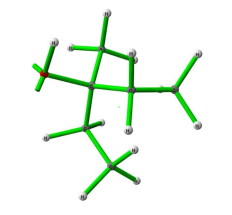 What is chiral centers?

We also discuss several other topics like Who is bryan stevenson?

Match each 1H NMR listing in ppm to a compound on the right.

Let’s start with 1 and go down the list. (These are confirmed correct answers):

1: There is 1H in a heptet meaning a carbon with one hydrogen has six hydrogen neighbors, this can only  be B because there is no others with a carbon with only 1 hydrogen and two methyl groups.  Don't forget about the age old question of What is the difference between aggregate and individual opinion?

2: There is 6H in a triplet, this can be broken up into 3H next to 2H x2. If you remember the homework  this will be like an ether structure, but we can see from the options there is no ether, but E has the  branching out.

3: We know we have 9H in a singlet this means they are bonded to a carbon with NO hydrogens, so we  can concluded D every quickly. We also discuss several other topics like In what country has the highest frequency of thunderstorms?

4: We have 3H in a singlet so we need a carbon with no hydrogens, that narrows it down to B,C, and E  but we have used B and E already. That means it is C.

(Attached is the flow chart, what salvador gives, and a nice chart from mastering organic) *At the end of  this packet*

6. Match the following IR to the compound that it corresponds to.

First look for an alcohol which printing area is 3500-3300 (s,broad). There is a peak around that area that  is sharp, but it is NOT broad. So we can rule out A. Now let’s look for an alkyne, that is 2260-2100(v) v  means varies, there is a small weak peak in that area so we can conclude we may have an alkyene so  that gives us B and E, and possibly C or D. Now lets look at aromatic which is 1600-1450 (v) we do have  many peaks around this area. So we have a ring with double bonds so know we are down to C and E.  Now let’s look for a nitrile which is 2260-2100(v) well this is the same as alkyne so this doesn’t help us.  However at 3300 from an alkyne there will be a sharp line at 3300 which does occur so we know it is  now E. Yes alkyne can have two different areas you can look at if you do not look at the full table you  may have missed that.

Match each infrared listing (cm-1) to a compound on the right. An IR table is on the second sheet.

Let’s pick out the ones with an alcohol first alcohols show up as a broad s, so we know 3 and 5 are  alcohols. (Going to start with those two)

2: We have 1126(s) as above we know this is in the range for ethers,esters and alcohols, there is only 1  option left for this type which is A. Also for esters there is a sharp signal between 1750-1735 which does  occur in this IR spectra given.

4: Is C, an aldehyde. An aldehyde(The carbon oxygen double bond) shows up as 1740-1720(s) we have a  signal at 1739 and it is sharp. Then we have three medium singals, the table shows for an aldehyde there  is 2900 and 2700 that medium signals can show up, we have three singals around those two numbers.

Match each compound to the number of 13C NMR signals it should have? Answers may be  repeated.

How I like to look at this is what parts of the molecule are equal to each other. In the first one there is  two singals, the four methyls would be equal because they are both on a carbon with no hydrogens, the  two carbons with no hydrogesnare equal as well giving 2 signals.

8 (or second one) is 4 look at it like the two methyls are “Equal”, the two methylenes are “equal”, but  the bond bonded area is not because the molecule doesn’t have symmetry, so the double bond will  have two singals, making 4.

Match each compound on the left to the number of 13C NMR signals it has. Answers may be repeated. 1. A a. 1

#1: All the signals are equal this is like with cyclohexane only has 1 signals.

The second one I am going to explain for this is number 4, as you may think there should only be 2  singals since three methyls, but look at the position, two are in front, one is in back, this will effect the  NMR. The two in the front are equal, so that’s one signal. The two carbons that they are attached to are  equal, so there is a second signals. The one in the back gets its on signal, and the carbon it is attached to  gets its own as well.

Chiral centers are tetrahedral atoms (usually carbons) that have four different substituents. Each chiral  center in a molecule will be either R or S.

and drawn in any hydrogens for viewing.  O 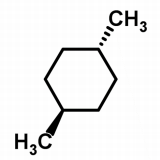 This kind of molecule would be achiral because you can create

a mirror image of it, however there is a plane of symmetry, so

This is trans-1,3-dimethylcyclohexane. As you can see

there are two forms of this molecule to be in the 1 and 3 position.

This molecule is chiral because there is two centers at the

methyls, the first one is S, and the second appears to be R but is really S because the methyl is in the  back and the hydrogen is in the front. Trans-(1S,3S)-1,3-dimethylcyclohexane 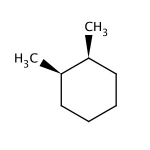 This is cis-1,2-dimethylcycloehexane. First there is a plane of

symmetry in the molecule, meaning even if there is chiral centers

we know that it is meso right away. 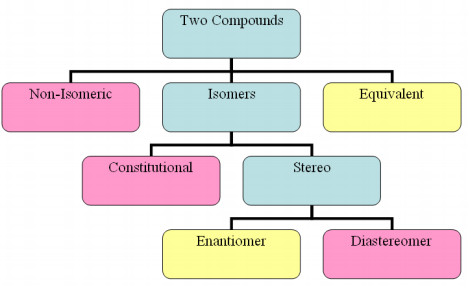 Pink means there will not have the same biological or IR/NMR spectra.

Yellow means they will have the same.

Below is a flow chart to help you understand this: 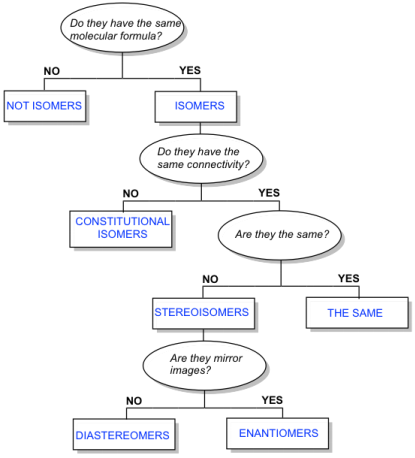 Connectivity -- representation of the attachments of atoms in a molecule  Examples of each one below: 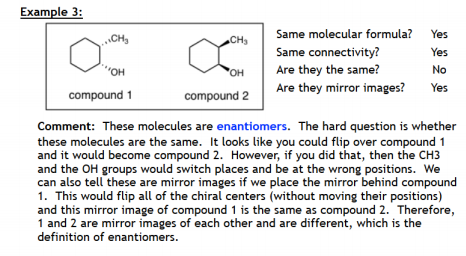 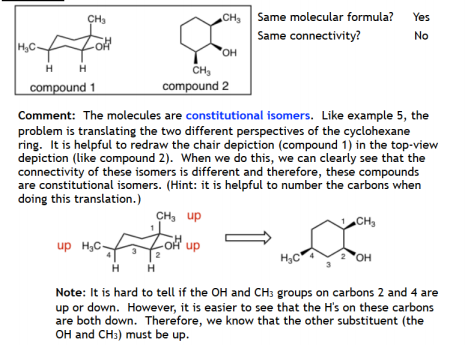 Finding the Number of Steroisomers:

First draw it out:

Well, how many isomers can be drawn from this? You could move the Br in the 1 position to the 3, but  wait that would make it the 1 position. So there is 1 isomer of this structure. Now, does this have plane  of symmetry? If it was butane it would but its pentane so no. Now plug it into the equation: 21-0=2 so  the answer is B.

significant digits in your answer. The units are degrees but you do not have to put the units in your  answer.

Given a 11 to 88 mixture of enantiomers by a method called Chiral HPLC (High Performance, Pressure or  Price Liquid Chromatography) with an observed specific rotation of 43°, what would be the specific  rotation of the pure (+)-enantiomer? Give two significant digits in your answer. The units are degrees  but you do not have to put the units in your answer. 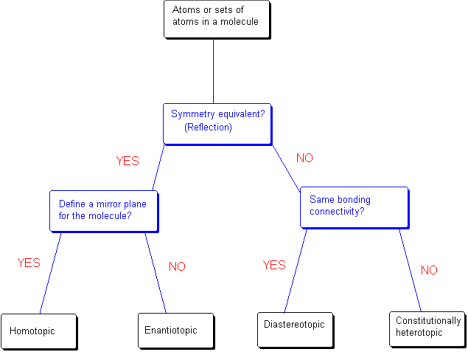 H4 and H8 b c. diastereotopic

Let’s take H1 and H11- First to note they are in the same plane. So this makes it a little easier. Pretend to  replace H1 with say a Br and then H11 with Br is the name still the same? Yes it is. The molecule if the Br  was at H1 or H11 would be the same so they are equivalent.

H4 and H8- First the symmetry is equivalent so they could be homotopic (meaning the same or  equivalent) or enantiotopic. Now picture putting a Br in the H4 and H8 position if you “mirrored” the  image would they still be the same? No they wouldn’t because they Br in H4 that is in front, would be  behind for H8 if we mirrored the image, so they are enantiotopic.

H4 and H9- the symmetry is equivalent because you can cut it in half and have equal parts. Now we  know we have homotopic (equivalent) or enantiotopic. So we mirrored the image would H4 turn into  H9? Yes it would the mirror of the molecule would make it the same, so they are homotopic.

H5 and H6- If you cut this in half it would be equal so we know we are dealing with diastereotopic or  constitutional heterotopic. Now do they have the same bonding connectivity? If you recall the definition  of connectivity it means do they have the same attachment? No they don’t one is in the front and one is  in the back, so this means them constitutional heterotopic.

The convention that is used to designate the configurations of chiral carbons of naturally occurring  compounds is called the D and L convention or system. To use it, we view the molecule of interest  according to the following rules:

1. The main carbon chain is oriented vertically with the lowest numbered carbon at the top. The  numbering used for this purpose must follow the IUPAC rules:

2. Next, the structure must be arranged at the particular chiral carbon whose configuration is to be  assigned so the horizontal bonds to that carbon extend toward you and the vertical bonds extend away  from you.

Glyceraldehyde, CH2OHCHOHCHO, which has one chiral carbon bonded to an aldehyde function,  hydrogen, hydroxyl, and hydroxymethyl (CH2OH), is of special interest as the simplest chiral prototype of  sugars (carbohydrates). Perspective views and Fischer projections of the d and l forms correspond to 17  and 18, respectively, where the carbon of the aldehyde function (—CH=0) is Cl:

In what year did adam smith publish "the wealth of nations"?

Who is the mathematician assistant of tycho brahe?