Description: The last exam of the semester is here, and this is just what you need to pass! This should help even more than the past ones, being the last exam that can possibly make or break our grades, this is very detail oriented and should really help those who just need a little bit more understanding. If you missed one lecture of notes, please do yourself a favor and take a look over this review guide. :)

I love that I can count on (Alicia for top notch notes! Especially around test time...

­ Observed his students’ bodies to develop his personality theory

­ Can identify personality structure and psychopathology

• Operates according to the pleasure princpal

• Demands immediate gratification of its urges

• Operates according to the reality principle

• mediates between the id and the superego

If you want to learn more check out How do we know what traits are going to lead to crime?

• Incorporates social standard about what represents right and wrong

1. Conscious: whatever one is aware of at a particular point in time 2. Preconscious: material just beneath the surface of awareness

3. Unconscious: what are aren't thinking about

• Conflicts cause anxiety, so the ego constructs defense mechanisms

• Defense mechanisms: largely unconscious reactions that protect a person from  unpleasant emotions such as anxiety

• Keeping distressing thoughts and feelings buried in the unconscious ­ Projection

• Attributing one’s own thoughts, feelings, or motives to another

• A reversion to immature patterns of behavior

­ Sublimation We also discuss several other topics like Where are pigments that function as attractants stored in a Plant cell?

• Occurs when unconscious and unacceptable impulses are channeled to socially  acceptable, perhaps even admirable, behavior

­ Failure to more forward from one stage to another as expected

­ Excessive frustration during certain stage leading to an overemphasis on

psychosexual needs during the fixated stage 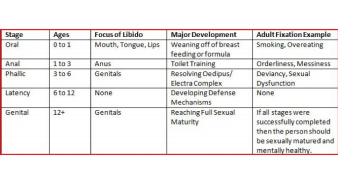 ­ Conflict: two or more incompatible motivations or impulses compete for expression • Approach­avoidance Don't forget about the age old question of What is a insider trading?

• approach­approach: 2 good options competing with each other

• Marked by chronic, high level of anxiety which is not based on any specific threat • Often called “free­floating anxiety”

• Temperament is a risk factor for anxiety

• Disturbances in the GABA circuits of brain

• Excessive preoccupation and worry over health

­ Dissociative amnesia: A sudden loss of memory for important personal information  that is too extensive to be due to normal forgetting

• Often following a traumatic event but without any clear brain injury ­ Dissociative fugue We also discuss several other topics like What is the scientific method?

• These people forget their name, family, where they live, and where they work, but  can remember things like how to drive

• little is know about cause

­ Emotional disturbances that may disrupt physical, social, and thought processes ­ Major depressive dosorder Don't forget about the age old question of what are the Characteristics of Atoms?

• Persistent feelings of despair, lose interest in sources of pleasure • Anhedonia: diminished ability to experience pleasure If you want to learn more check out what is adolescence?

• Mood disorders are accompanied by changed in neurochemical activity in the brain, particularly at norepinephrine and serotonin synapses

­ When a human (or animal) has learned to behave helplessly

• Delusions­ false beliefs, clearly out of touch with reality

• Hallucinations­ sensory perceptions in absence of external cause (hearing voices,  seeing people that aren't there)

1. Paranoid­ delusions of grandeur and fear or persecution

4. Undifferentiated­ not fitting a specific substance

• Positive: something added to behavior

­ Structural abnormalities of the brain

• Reductions in gray and white matter

• Concerned with controlling anxiety and fear of social rejection

• Feel distrustful, unable to connect with others

­ Know the prognosis of the disorders

• Prions: proteins that replicate themselves; cause manic symptoms of Mad Cow  disease

­ Therapist interprets the symbolic meaning of the clients dreams

­ Freud called dreams the “royal road to the unconscious”

• Attempt to explain significance of clients thoughts and behaviors

­Carl Rogers: the big problem in most peoples life is that there is an incongruence in  peoples self concept and reality

• Must be honest with client

­ Recognize negative thoughts ­ how do you interpret situations?

­ Rate level of anxiety, then start from lowest and moving up to fix them ­ Aversion therapy

­ Modeling ­ learning from watching others

­ It is very successful at preventing future episodes, but can be toxic and requires  careful monitoring 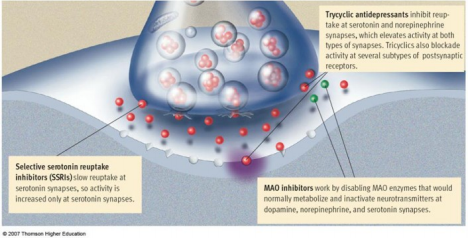 • Electric shock used to produce a cortical seizure and collisions

• Single most effective treatment for depression

What drugs are used to treat what disorders and how to they work? ­ Schizophrenia

what is Structuralist theory?