?Consider a fictitious one-dimensional system with one electron. The wave function for the electron, drawn below, is \(\psi(x)=\sin x\) from x = 0 to \

Consider a fictitious one-dimensional system with one electron. The wave function for the electron, drawn below, is \(\psi(x)=\sin x\) from x = 0 to \(x=2 \pi\).

(b) At what value or values of x will there be the greatest probability of finding the electron?

(c) What is the probability that the electron will be found at \(x=\pi\)? What is such a point in a wave function called? [Section 6.5] 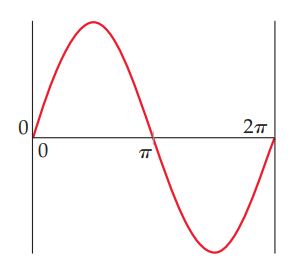 Calculus: Early Transcendental Functions : Additional Topics in Differential Equations
?Testing for Exactness In Exercises 1 and 2, determine whether the differential equation is exact. Explain your reasoning. \((5 x-y) d x+(5 y-
Calculus: Early Transcendental Functions : Extrema on an Interval
?Finding the Value of the Derivative at Relative Extrema In Exercises 1-6, find the value of the derivative (if it exists) at each indicated extremum.
Calculus: Early Transcendental Functions : Plane Curves and Parametric Equations
?In Exercises 1-18, sketch the curve represented by the parametric equations (indicate the orientation of the curve), and write the corresponding recta
Chemistry: The Central Science : Gases
?An aerosol spray can with a volume of 250 mL contains 2.30 g of propane gas \(\left(\mathrm{C}_{3} \mathrm{H}_{8}\right)\) as a propellant.
Chemistry: The Central Science : Chemical Kinetics
?A reaction \(\mathrm{A}+\mathrm{B} \longrightarrow \mathrm{C}\) obeys the following rate law: Rate = \(k[\mathrm{~B}]^{2}\). (a) If [A] is d
Chemistry: The Central Science : Acid-Base Equilibria
?Which of the following diagrams best represents an aqueous solution of NaF? (For clarity, the water molecules are not shown.) Will this solution be ac
Chemistry: The Central Science : Chemical Thermodynamics
?Indicate whether each statement is true or false. (a) Unlike enthalpy, where we can only ever know changes in H, we can know absolute values
Statistics: Informed Decisions Using Data : Data Collection
?In Problems 11–13, classify the variable as qualitative or quantitative. If the variable is quantitative, state whether it is discrete or continuous.
Statistics: Informed Decisions Using Data : The Five-Number Summary and Boxplots
?Exam Scores After giving a statistics exam, Professor Dang determined the following five-number summary for her class results: 60 68 77 89 98. Use thi
Statistics: Informed Decisions Using Data : The Randomized Complete Block Design
?Given the following ANOVA output, answer the questions that follow: (a) The researcher wants to test H0: m1 = m2 = m3 =
Statistics: Informed Decisions Using Data : Two-Way Analysis of Variance
?Concrete Strength An engineer wants to know if the mean strengths of three different concrete mix designs differ significantly. He also suspects that
Chemistry: The Central Science : Electrochemistry
?Indicate whether each of the following statements is true or false: (a) If something is oxidized, it is formally losing electrons. (

?Consider a fictitious one-dimensional system with one electron. The wave function for the electron, drawn below, is \(\psi(x)=\sin x\) from x = 0 to \