?You have a sample of gas in a container with a movable piston, such as the one in the drawing. (a) Redraw the container to show what it migh

You have a sample of gas in a container with a movable piston, such as the one in the drawing.

(a) Redraw the container to show what it might look like if the temperature of the gas is increased from 300 to 500 K while the pressure is kept constant.

(b) Redraw the container to show what it might look like if the external pressure on the piston is increased from 1.0 atm to 2.0 atm while the temperature is kept constant.

(c) Redraw the container to show what it might look like if the temperature of the gas decreases from 300 to 200 K while the pressure is kept constant (assume the gas does not liquefy). [Section 10.3] 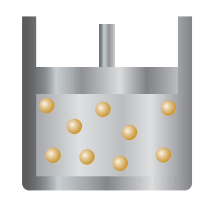 Step 1 of 5) Metals also have unusual properties on the 1–100-nm-length scale. Fundamentally, this is because the mean free path (Section 10.8) of an electron in a metal at room temperature is typically about 1–100 nm. So when the particle size of a metal is 100 nm or less, one might expect unusual effects because the “sea of electrons” encounters a “shore” (the surface of the particle). The interior surfaces attract ions and molecules that weakly interact with the rigid framework of aluminum, silicon, and oxygen atoms. Various pore and cavity sizes can be prepared by varying the chemical composition and synthesis method. Zeolites may be synthesized with weakly interacting ions occupying the cavities. Upon exposure to ions that interact more strongly with the interior surfaces, there is a preferential exchange of weakly interacting ions for more strongly interacting ions.This effectively creates what we might think of as an ionic sponge. An example that illustrates this behavior is the use of a sodium zeolite to remove radioactive cesium (134Cs and 137Cs) from contaminated areas around the Fukushima Daiichi nuclear power plants in Japan, which were damaged by an earthquake and tsunami in 2011.

Calculus: Early Transcendental Functions : Preparation for Calculus
?In Exercises 9-14, sketch the graph of the equation. Identify any intercepts and test for symmetry. \(y= -\frac{1}{2} x+3\)
Calculus: Early Transcendental Functions : Differentiation
?Finding a Derivative In Exercises 53–78, find the derivative of the function. \(f(\theta)=\frac{1}{2} e^{\sin 2 \theta}\)
Calculus: Early Transcendental Functions : Functions and Their Graphs
?In Exercises 1–10, evaluate the function at the given value(s) of the independent variable. Simplify the results. 1. f(x) = 7x - 4 (
Calculus: Early Transcendental Functions : Inverse Functions
?Verifying Inverse Functions In Exercises 1-8, show that \(f\) and \(g\) are inverse functions (a) analytically and (b) graphically. \(f(x)=\f
Calculus: Early Transcendental Functions : Exact First-Order Equations
?Solving an Exact Differential Equation In Exercises 5-14, determine whether the differential equation is exact. If it is,find the general solution.
Chemistry: The Central Science : Molecular Geometry and Bonding Theories
?The orbital diagram that follows presents the final step in the formation of hybrid orbitals by a silicon atom. (a) Which of the following b
Chemistry: The Central Science : Molecular Geometry and Bonding Theories
?The diagram that follows shows the highest-energy occupied MOs of a neutral molecule CX, where element X is in the same row of the periodic table as C
Chemistry: The Central Science : Solids and Modern Materials
?The accompanying image shows photoluminescence from four different samples of CdTe nanocrystals, each embedded in a polymer matrix. The photoluminesce
Statistics: Informed Decisions Using Data : Discrete Probability Distributions
?Emergency Room Visits The probability that a randomly selected patient who visits the emergency room (ER) will die within 1 year of the visit is 0.05.
Statistics: Informed Decisions Using Data : The Randomized Complete Block Design
?Waiting in Line A quality-control manager at an amusement park feels that the amount of time that people spend waiting in line for the American Eagle
Statistics: Informed Decisions Using Data : Two-Way Analysis of Variance
?What is an interaction plot? Why are they useful?
Chemistry: The Central Science : Chemistry of the Nonmetals
?Write a balanced equation for each of the following reactions. (You may have to guess at one or more of the reaction products, but you should be able

?You have a sample of gas in a container with a movable piston, such as the one in the drawing. (a) Redraw the container to show what it migh