The following diagrams represent equilibrium mixtures for the reaction \(\mathrm{A}_{2}+\mathrm{B} \rightleftharpoons \mathrm{A}+\mathrm{AB}\) at 300 K and 500 K. The A atoms are red, and the B atoms are blue. Is the reaction exothermic or endothermic? [Section 15.7] 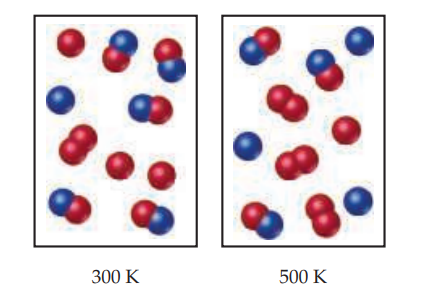 Step 1 of 5) In recent years fracking, short for hydraulic fracturing, has become widely used to greatly increase the availability of petroleum reserves. In fracking, a large volume of water, typically two million gallons or more, mixed with various additives, is injected at high pressure into wellbores extended horizontally into rock formations (Figure 18.23). The water is laden with sand, ceramic materials, and other additives, including gels, foams, and compressed gases, that serve to increase the yield in the process. The high-pressure fluid finds its way into tiny faults in geological formations, releasing petroleum and natural gas. Fracking has greatly increased petroleum reserves, particularly of natural gas, in many parts of the world. Unfortunately, the potential for environmental damage from fracking is significant. The large volume of fracking fluid required to create a well must be returned to the surface. Without purification the fluid is rendered unfit for other uses, and becomes a large-scale environmental problem. Often the waste water is allowed to sit in open waste water pits. The 2005 Energy Policy act and other federal legislation exempts hydraulic fracturing operations from certain provisions of the Safe Drinking Water act and other regulations.

Calculus: Early Transcendental Functions : Linear Models and Rates of Change
?In Exercises 5-10, plot the pair of points and find the slope of the line passing through them. (4,6), (4,1)
Calculus: Early Transcendental Functions : Inverse Trigonometric Functions: Integration
?In Exercises 1-20, find the indefinite integral. \(\int \frac{1}{\sqrt{1-(x+1)^{2}}} d x\)
Calculus: Early Transcendental Functions : The Dot Product of Two Vectors
?In Exercises 1-8, find (a) \(\mathbf{u} \cdot \mathbf{v}\), (b) \(\mathbf{u} \cdot \mathbf{u}\), (c) \(\|\mathbf{u}\|^{2}
Calculus: Early Transcendental Functions : Greens Theorem
?In Exercises 7 - 10, use Green's Theorem to evaluate the integral \(\int_{C}(y-x) d x+(2 x-y) d y\) for the given path. \(C
Chemistry: The Central Science : Liquids and Intermolecular Forces
(a) What is the significance of the triple point in a phase diagram? (b) Could you measure the triple point of water by measuring the temperature
Chemistry: The Central Science : Thermochemistry
?Use the equations given in Problem 5.15 to calculate: (a) The electrostatic force of repulsion for two protons separated by 75 pm.
Chemistry: The Central Science : Molecular Geometry and Bonding Theories
?How does a trigonal pyramid differ from a tetrahedron so far as molecular geometry is concerned?
Statistics: Informed Decisions Using Data : Scatter Diagrams and Correlation
?Lyme Disease versus Drownings Lyme disease is an inflammatory disease that results in a skin rash and flu like symptoms. It is transmitted through the
Statistics: Informed Decisions Using Data : Applications of the Normal Distribution
?In Problems 5–12, find the indicated areas. For each problem, be sure to draw a standard normal curve and shade the area that is to be found. Det
Statistics: Informed Decisions Using Data : Estimating a Population Standard Deviation
?True or False: To construct a confidence interval about a population variance or standard deviation, either the population from which the sample is dr
Statistics: Informed Decisions Using Data : Tests for Independence and the Homogeneity of Proportions
?The table in the next column contains observed values and expected values in parentheses for two categorical variables, X and Y, where variable X has
Chemistry: The Central Science : Reactions in Aqueous Solution
?Indicate the concentration of each ion or molecule present in the following solutions: (a) 0.25 M \(\mathrm{NaNO}_{3}\), (b) \(1.3