The awe-inspiring Great Pyramid of Cheops was built more

(a) Calculate the gravitational potential energy stored in the pyramid, given its center of mass is at one-fourth its height.

(b) Only a fraction of the workers lifted blocks; most were involved in support services such as building ramps (see Figure \(7.45\)), bringing food and water, and hauling blocks to the site. Calculate the efficiency of the workers who did the lifting, assuming there were \(1000\) of them and they consumed food energy at the rate of \(300 \mathrm{kcal} / \mathrm{h}\). What does your answer imply about how much of their work went into block-lifting, versus how much work went into friction and lifting and lowering their own bodies?

(c) Calculate the mass of food that had to be supplied each day, assuming that the average worker required \(3600 kcal\) per day and that their diet was \(5 \%\) protein, \(60 \%\) carbohydrate, and \(35 \%\) fat. (These proportions neglect the mass of bulk and nondigestible materials consumed.) 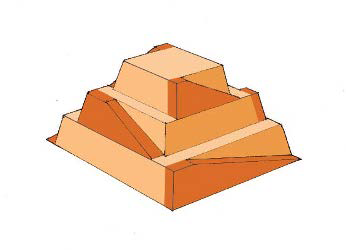 In this section, we need to find the gravitational potential energy stored in the pyramid.

The mass of the pyramid is given as, .

The height of the pyramid is, .

The gravitational potential energy stored in the pyramid can be calculated as,

The awe-inspiring Great Pyramid of Cheops was built more