An element X reacts with F2(g) to form the molecular product shown here. (a) Write a balanced equation for this reaction (do not worry about the phases for X and the product).(b) Do you think that X is a metal or nonmetal? Explain. [Section 7.6] 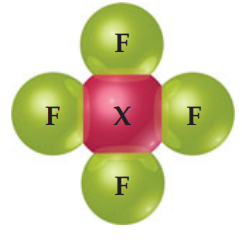